Aaron McGarry is a visual artist working primarily in sculpture and site-specific installations – and a Reverse Garbage shopper. His art reflects his concern about our environmental and social impacts on the world around us. In keeping with this, much of his work is created from found materials and upcycled resources, brilliantly reimagined into new forms.

RG: Hi Aaron! Thanks for talking to us! Can you please tell us a bit more about your background and what influenced you to become an artist?

Aaron : I think I’ve always been an artist. Growing up in the desert town of Broken Hill, I was fortunate to have a large artist community around me which fostered my desire for making art. I was lucky to have parents who supported my creative endeavours! Pro Hart lived down the road and often my father and I would visit his shed studio in the sweltering heat and he’d give me small paintings on bibles. In his gallery were sketches and drawings by masters like Picasso and Dali, and I’d spend hours looking through his collection.

From an early age, I was inspired by the natural beauty around me in the desert – the flora and fauna, red earth and blue skies – but what I loved most was the rubbish. Old tins and melted bottles from the 1950s in an old dump outside of town, stuff like that. I used to walk through the desert to collect bags of old car parts, scrap metal and whatever else I could find, then I’d take them home, lay them out, and build dogs, men, and birds out of them.

When I moved to Sydney, I worked for a while doing fashion styling at studios and magazines before heading to National Art School, which instilled in me the desire to become a visual artist.

For the past 10 years, I’ve shown in public spaces and in galleries around the country. Notably at the National Portrait Gallery in Canberra and in shows like the Blacktown Arts Prize where I won an Environmental Art award for my sculpture ‘The Great Pacific Garbage Patch’ in 2010. I work across sculpture, installation, photography, video and drawing, and my art continues to be environmentally and socially engaged – it’s these themes that keep me interested in creating new pieces. Often I seek to present an artwork that is beautiful and joyous at first glance, but on a deeper level causes the viewer to reflect on things that need protecting, or actions that need to be undertaken to mend or restore.

Aaron: Yes, about 80% of the sculpture was created from rescued and upcycled materials, all sourced from Reverse Garbage. During its three months construction , I was at RG every other week, hunting and gathering the materials I needed.

It was designed and created for ‘Art on the Greenway‘, a fantastic annual show in Haberfield which has been held for the past few years. It activates the Richard Murden Reserve (affectionately called The Greenway) and sections of the Inner West Bay Run as a sculpture and installation symposium, which is energized towards environmental art and works about environmental concerns. They have submissions open at present if anyone is interested! It’s a great show to be a part of.

My idea was to look at the little things and make them BIG. Superb fairy wrens nest along The Greenway and local bush care teams are undertaking regeneration projects of the small shrubbery where they nest and live. On a few site visits, I noticed trash in the garden beds which got me thinking about just how BIG these little things would be to small birds.

It would be like dumping a big black trash bag next to you on the couch and saying “how you like them apples?” Many of us don’t really concern ourselves with the impact small things can make, but all these little things add up to create a BIG problem.

RG: Can you describe your design process for ‘BIG little things’?

Aaron: This was the largest free-standing sculpture I’ve made to date, so it was a challenge from the get-go!

I started with research on the local fauna which inhabits The Greenway, from which a concept design was created of what the work would roughly look like. I had found tonnes of ribbon at RG in the bird’s feather colours so I set about making small feathers in the ribbon to see how they worked, testing them out in different weather conditions and with different fixatives. Then once I had the green light to make it, I had to figure out the rest on the fly.

RG: How did you decide on the materials to use for the piece? What other RG materials did you use?

Aaron: Some of the piece came together by chance, adapting to what was available and what I could alter to suit the pre-fabricated idea in my head. The ribbon was the jumping-off point but RG also had some large plastic spindles and a tonne of polystyrene blocks which made up the bulk of the shape and form. The spindle served as the base/plinth for the bird and would ultimately become the crushed coke can it was perched on. The body was carved and constructed using the foam blocks. The armature inside was made from old plumbing piping. It all sort of came together step-by-step as I found new materials to work with. I went searching through RG and found what I could use and then tried to “artcycle” it (taking the object/material or meaning of the rubbish and reinventing it into art). The beak and claws were made from reuse rubbers and even the feather bases were cut out from old coreflute sheets I found.

Aaron: As I mentioned, the sculpture was made for the Art on the Greenway show, which coincided with the Edge Festival. Large crowds attended the event and it was great to have so many people viewing the piece! After the show, the Wren spent a few months in my dad’s farm shed up near Tamworth, but it’s now safely nestled in Macquarie Park’s Eden Garden Centre for this year’s Eden Unearthed. I’m so pleased that this work is getting a second life in another show – he’ll be there for the next six months, and after that, who knows where!

RG: What message do you hope the viewer will take away from this artwork?

Be kind to the little things and the bigger things too. The planet is the only home we all have to share, all of us, birds, plants, animals. As the ’smartest‘ species, we do some pretty dumb things, so if people can look fondly upon a giant bird perched on top of a giant crushed coke can and wonder “what’s this all about?”, then perhaps it might influence future behaviour or challenge us to consider how our actions impact other living things. If nothing else, I hope people experience a joyful moment when viewing the work – we could all do with a little more joy and beauty in the world at present.

RG: Can you please tell us how you approach a visit to Reverse Garbage? Do you come with a specific goal in mind, or do you see what materials are available and adapt your design or derive inspiration from there?

Aaron : Hahaha… I always go in with a goal in mind and come out with a car load of things I wasn’t expecting to get! I think I enjoy the surprise of the experience. It really is trash that I see as a treasure! Sometimes I’ll walk into RG and find something that I have no plans for yet, but I just know it won’t be there the following week. My studio is full of tubs of RG materials and it does get used…eventually! For the past two years, I’ve been collecting rope from RG and The Bower and am only now making a work out of it – all that hunting and gathering are finally becoming a new form. At other times, things just seem to fit into what I’m creating, as if it was meant to be.

RG: Do you have any other artworks that have utilised Reverse Garbage materials? We’d love to know more about them!

Aaron: A few artworks have had splashes of RG stuff in them – as mentioned I’m working on a new rope sculpture at the moment. It’s also using leftover foam from the bird as its form and some perspex recently acquired from RG.

I’ve been coming to RG since I moved to Sydney in 2001. I’ve had an Upcycle shop which utilised a tonne of RG stuff and even recently decked out my new studio/living space with carpet and trimmings from RG. At the moment, I have an old theatre curtain in my lounge room that I picked up there last week!

RG: Finally, what’s next on creative agenda? Do you have a current work in progress?

Aaron: Well, I’m working on a few new sculptures at the moment, not sure where they’ll end up but I’m having fun making them. I’m also working on some installations for the ‘Love Local Artisan‘ market day coming up in October in Sans Souci. I’ve been sourcing fabrics and other materials from RG already for this and I can’t wait to share in the immersive community market experience with sculptural forms made from reuse materials!

Trivia with a Cause a Success 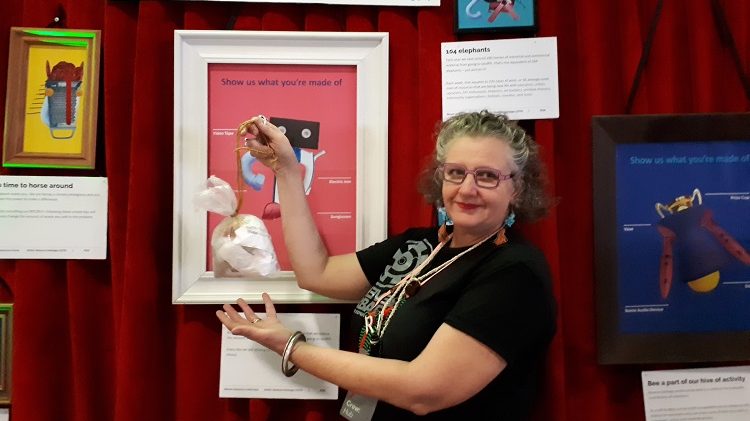 Qantas showed you theirs, now we’ll show you ours

Lovely leather offcuts being unpacked as I type and sorted by colours. We’ve got a range of greys, burgundy, browns, black, greys, white and green.
Loose parts play in action at Neutral Bay OOSH during the holidays.
1982: excerpt from an article in Primary Journal by Judy Reizes, one of the early RG team members.
Look at the fab colours on these street banners! Lots of fun with metres of colour-fast fabric made for the outdoors.
Loading Comments...
Comment
×
%d bloggers like this: